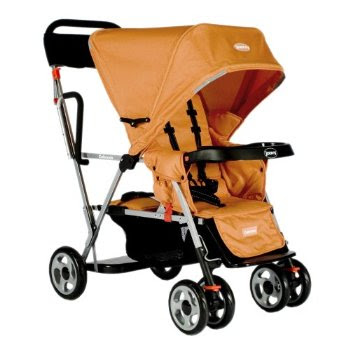 I'm trying to convince Bryan that this is the only really big thing we will need for Baby #3, so it's worth the splurge...someone back me up!

I'm looking at the Joovy Caboose Ultralight Stand-On Tandem Stroller. I've pushed a lot of double strollers that are heavy and unwieldy, so this looks more compact and easy to maneuver. Also, Chase will hopefully be walking then, and he could sit in the jump seat in back, rather than being trapped in a seat all the time. And I think Ian would be able to hop on and share the back with Chase whenever he gets the lazies.

I have a double jogging stroller already, but it's just not practical for going to the mall or shopping or whatever. It's huge and hard to fold, it doesn't hold an infant seat, or fit through doors. Also, when Chase sits next to anyone, he spends most of his time trying to rip off his neighbor's lips, nose, or eyeballs. Ian can defend himself, but I just don't think an infant will be able to stand up to him.

So...does anyone have any experience with this stroller? It's a little pricier than some of the other models, but from the reviews I've read, it's worth it. What do you think?

*Oh, and it comes in Bronco Orange! Hello! That should be a huge selling point for him, right?

I actually bought a clearance model of the Joovy Caboose, but then I returned it, because I really didn't need it. It seemed pretty nice though.

That was at Babies R Us, if you want to test drive one.

I also think strollers are one of the few baby products where you get what you pay for, and spending a bit more is worth it. Especially if you figure how much you'll use it.

Also, shop around. Is this the exact same thing for $179? I checked on froogle.com and got a big range.

I HAVE THAT STROLLER!!

Sorry for the caps, but I'm so excited, I couldn't even read your whole post. I LOVE MY JOOVY!!! We even have the orange, which makes it super easy to pick out in crowds (or if you leave it behind at an amusement park or something)

I LOVE MY JOOVY! the wheels? Are awesome. Braden loves hopping on & off the back.

Let me know if you have any questions - I'd be happy to chat up my Joovy!

The only downfall, the basket area is small and my diaper bag is HUGE - but we have a smaller bag, which we use with the stroller. The sit/stand feature cuts into the basket accessibility a little.

I don't have that exact one, but I do have a sit and stand stroller. It is well worth the money! I had a double stroller before that...the sit and stand is much better! My kids love it! I don't know how big your boys are, but I can actually carry 3 kids on that stroller...2 of them can sit on the back together. They also like to take turns walking and riding, so they're constantly switching out in the back (with the same kid strapped in the front at all times).

We had a double side by side stroller, and it was awful, I always wanted one of these with the ability to stand on the back but my husband refused : (

Cate's link is for the original Joovy - the new one (in your picture) is the ultralight. This is really important - because the wheels are totally different.

I stalked a guy at our children's museum once, to ask about his Joovy (when we were looking to buy) and he said the wheels were clunky. The Ultralight wheels are wonderful.

We have a baby trend sit n stand stroller, one of the newer models, not the old tank ones. It's neat though. You can use it as a double stroller with two actual stroller seats, or you can take off the back seat cushions and it becomes a sit n stand. It's been a livesaver since my middle child was only 17 months old when the baby was born. Now they are 17 months and almost 3, but we still use the seat feature more than the sit n stand feature at this point. Oh, and it holds an infant seat in front.

Good luck with the stroller hunt! You can never have too many if you ask me. At one point I had two kids, one on the way and FIVE strollers. Seriously. I'm so lame. :)

Ditto to what Michelle said. I LOVE this stroller. The small basket size is annoying but it is so much better than having some monster stroller to push around.

Zach is the same age as Ian and he even rides in it. It is great if you are in a hurry at Target or something!

You know I adore mine, but it is awfully heavy. Lighter would be better. And you are right about two kids on the back. Leah and Ian love riding together on the back of mine.

I liked all features of Joovy Caboose Ultra light Stand-On Tandem Stroller is equipped with all the best features but little bit pricey. I am using Mickey sport pushchair for Dylan he enjoys every minute in it.