Chase woke up at a little after 7 (not bad!) and we tried to sneak downstairs and let Ian sleep in a little while we made coffee and heated up Grandma Maddex's famous coffee cakes (I made 9 of them this year, so we will have plenty to eat!). Ian woke up shortly after we went down the stairs with Chase yelling "DA DA DA DA DA DA DA DA!" all the way down.

We had lots of present unwrapping, with Ian acting as the elf who passes out everyone's gift, but often mistakes their names for his and ends up opening gifts that aren't technically his. 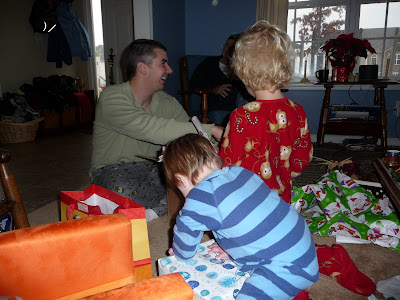 The incredible balancing act: eating and holding coffee cake with a squirmy one year old. Don't mind my full mouth. Also notice how we all have supercool footie pajamas on. 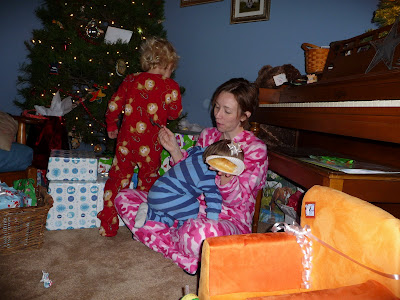 One of Chase's favorite presents was this red paper fluff. The best thing to do with it was to put it on Gaga's head. 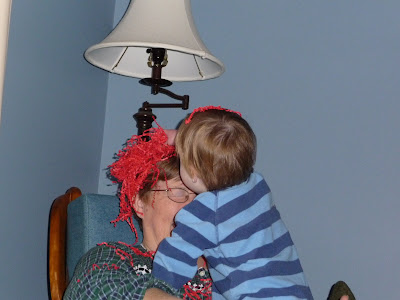 Chase's new chair is the perfect height for standing on and reaching the piano. He serenaded us for a good part of the morning. 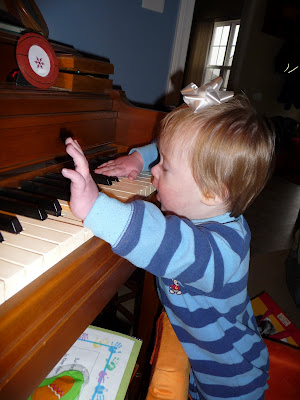 Chase got this cool Koala Climber from Santa. Papa is teaching him how to go up the slide...we'll have to break him of that habit later. 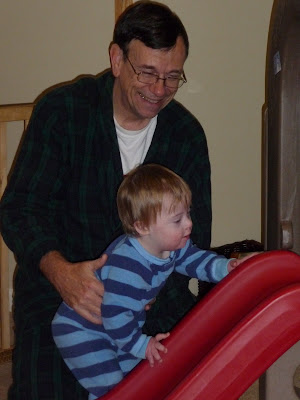 Ian empties his stocking, Chase looks on from his throne. Notice the giant gash on Ian's cheek-- he fell out of bed Christmas Eve and scraped his face on his toybox... And here I thought we lucked out because his fat lip was all healed in time for Christmas. 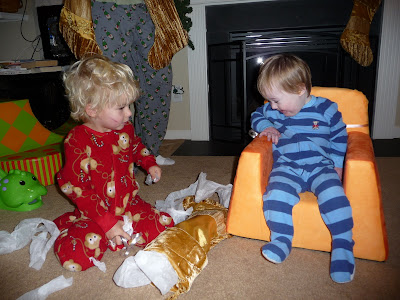 Ian's best Santa gift...the Razor scooter he wanted. I'd never ridden one before, but it is surprisingly fun to zoom around on in the kitchen! I was thinking maybe I could get myself one and then preparing meals in there would take a lot less time. 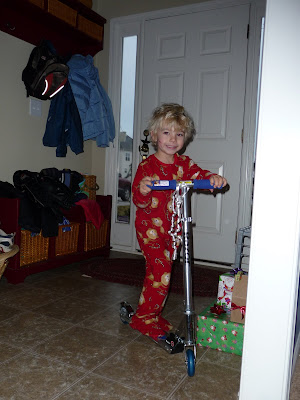 Evidence that Uncle Scott was here :) 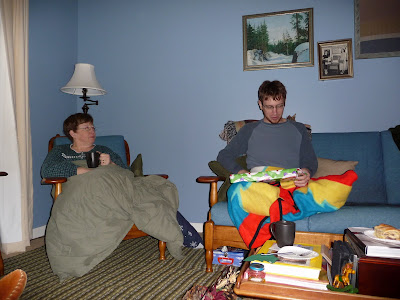 It was a really, really nice day. I think we all eventually got out of our pajamas by noon-ish, then commenced napping and snacking, and finished off the day with a steak dinner and roasted asparagus with this awesome artisan chardonnay oak smoked salt that Bryan got me for Christmas. YUM.

Oh, and I forgot to mention the incredible Christmas eve service we went to in Uptown Charlotte in the Belk Theatre. It was an awesome celebration, made even more special because we got to ride the train into the city :) They did all the traditional music, with Elevation's almost trademark twist...like Drummer Boy that looked like an exerpt from the Blue Man Group. Totally cool.

Anyway. Hope you all had a very merry Christmas (and everything else that you celebrate)...we sure did :)
Posted by Laurie at 5:12 PM