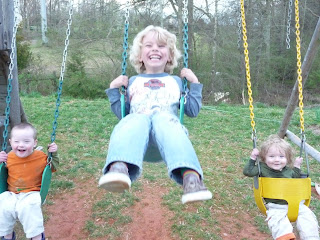 **Big Deal Alert:  Notice that Chase is on a big boy swing by himself.  This week he all of a sudden got the concept that if he lets go, he will definitely fall off.  It is supercute because he curls his little legs under the swing to help stabilize himself.  That is going to suck when he learns about pumping...
Posted by Laurie at 10:23 AM 3 comments:

I am getting my birthday shopping on for Chase's upcoming THIRD birthday.  I know I definitely want to get him his own little broom and mop set (I know.  Woo-hoo!  Aren't I the cruelest mom EVER?  But seriously, he loves to sweep and it is getting to the point where I can't get my broom out and even think about actually getting anything swept up off the floor; he likes to "help" so much.).

But I am also thinking about this Bilibo thing:

Has anyone bought one of these things yet?  Ian tried one out in the local "pricey cool toy store" and thought it was pretty fun.  I thought if Chase had one around the house, he might play around on it.  It looks like it would be good PT-skill building, core strengthening stuff.  I may have to order it from Amazon.
Posted by Laurie at 9:23 PM 1 comment:

There is a written story and a video clip.  She is the cute red head.
Posted by Laurie at 10:16 PM 1 comment:

Angelle told me this story that happened when she dropped Chase off at school yesterday:
Chase walks in the classroom, and a little boy named Connor (right, Angelle?) gets this big grin on his face and says, "CHASE is here!!!"  Then he gives him a big hug and says, "I LOVE Chase!"
How sweet is that?
We are really, really, really, REALLY, reallyreallyreallyreallyreallyreally going to miss this class when he starts public preschool at the end of April.  Really.
I have to think of some awesome gifts for his teachers and the director.  Any suggestions?
Posted by Laurie at 1:20 PM 2 comments:

It is World Down Syndrome Day!

March 21st is 3/21, representing the 3 copies of the 21st chromosome that Chase sports.

Celebrate the little extra in your life :)  I get to do it every day!
(I also get to stamp my foot and throw my hands up in the air, but this face makes it all better!) 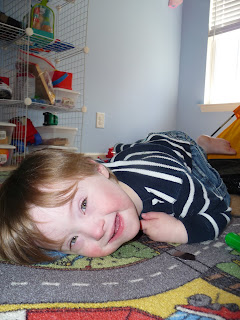 Posted by Laurie at 4:49 PM No comments:

No, I'm not cleaning my house (silly!). I have discovered a new vacuum for my time:
blogs about teaching!
I don't know why I didn't think about this sooner! The anticipation of going back into the classroom this fall is building rapidly, and I am a total dork about how much I love planning, preplanning, post-planning...setting up a brand new classroom, wondering what my kids will be like...fantasizing about kick-butt lessons, units, and themes I will be teaching.
The drawback is, I haven't been in a classroom in 5 years now, and my brain is a little rusty, if not completely filled with feeding schedules, medications, poop problems, and a thousand toddler songs and rhymes.
I kept telling myself that I would start to read my education journals in the year before I go back to school, reread some of my favorite professional books, and generally go into the school year prepared. Or even walk into the interview sounding current and well-educated.
You can guess how much of THAT I have accomplished.
But, HELLO BLOGS! I can certainly find time to futz around on the Internet reading about other teachers' great ideas and mishaps! Boo-yah! I am SO excited. My only problem will be devising a way to remember everything before it falls out of my sleep-deprived head.
Posted by Laurie at 9:39 AM 1 comment:

I have been super excited for Chase to start preschool. The momentum is building, and I know how much he loves his little part-time preschool, and how much he learns from watching other kids and participating in the class activities.
Once, I kid you not, the teachers told me that "Chase is their best listener." Seriously. My Chase. I know, because I asked them, "My Chase?!" And they said yes.
Anyhoo. We had his evaluation and intake meeting this week, and I really had good feelings about the school and the therapists that we met. They said that the teacher would call us to set up a classroom visit shortly.
So, I got a message yesterday afternoon from the teacher, we will call her Ms. T. She asked me to call back to set up a time. It was after school hours that I got the message yesterday, so I was going to call back today.
Well, at 9:30 this morning, she called me and we set up a time. She was a little abrupt on the phone, didn't know if Chase was a boy or a girl, and asked me his name twice. Whatever.
Then, the real fun started. After we ended the call, I put my phone down, and because it was my cell, I usually don't press END, because when the call is disconnected from the other side, it hangs up automatically. Except, it didn't hang up, because Ms. T didn't hang up her side. And I could hear the conversation on the other end.
It wasn't all that bad, really. She just told her assistant that the new child was going to visit on Monday, that he was an "EC kid" not a peer buddy, that she didn't know the kids were supposed to come visit before they started school, and that I sounded Caucasian (Ms. T sounds African-American, for the record). Oh, and that she left me several messages, but I never called her back.
I think what bothered me the most was the tone. It just kind of sounded like Chase was a burden on her, that the visit was a cramp in her day, and that by not calling her back this morning at 7am I was somehow the most unreliable, worst parent ever. And not to mention the fact that the big focus on what race we were apparently makes some kind of difference...?
Oy. I don't know. Maybe I am just freaking out at every little thing because, even though I am excited for Chase to be in preschool, I am also just a teensy bit worried that I don't know what goes on there all day long, I don't know that the teachers will love him for all of the Chase that he is, and I don't have any control over those things at this point. And to send my little, mostly nonverbal boy out there for 8 hours a day with people that I don't know (or trust right now) is WAY scary.
Posted by Laurie at 9:50 AM 7 comments:

Photos of the Maddex Reunion

Don't worry- no photos were taken of people active with the stomach bug. Or kidney stones.
These are in reverse order- Blogger apparently likes them this way.
The ride home. I love how Chase maxes and relaxes in the back of the van. 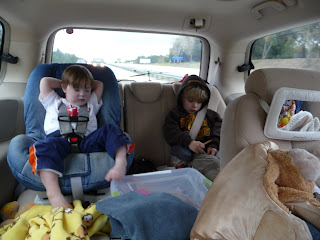 Chase reads, draws magnadoodle, and watches a movie all at the same time. 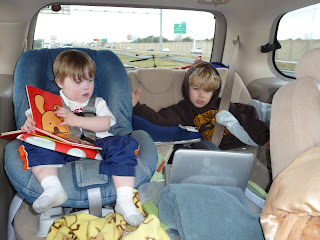 Mom and her boys. From left: Brett, Trent, Bryan, Todd. I don't know if they did this on purpose, but I like how they stood in birth order. 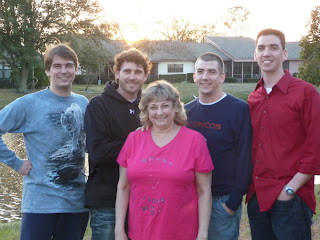 The brothers- no Mom. 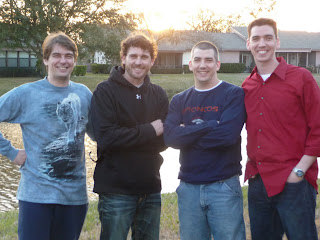 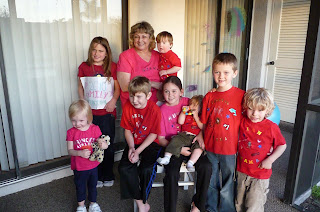 Gavin wore his tie to the park. 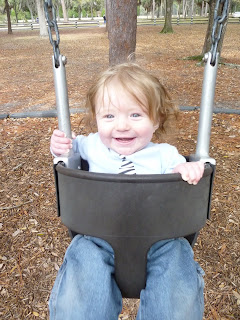 Chase loved the slide- even more so when he knew that Bryan was at the bottom of it. 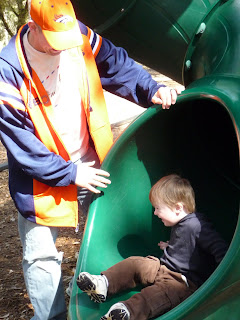 Proof that I was there. I heart my Moby Wrap. 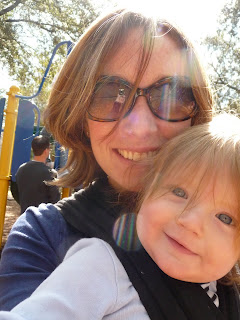 Ian and Tristan were Best Buds. Ian even asked LeShayne if they would please move close to us so that they could play together more. 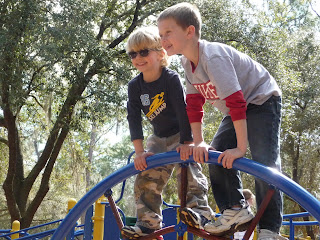 Todd did a great job on Chase duty. 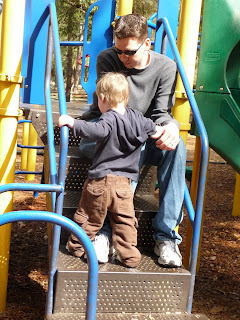 What I Want to be When I Grow Up 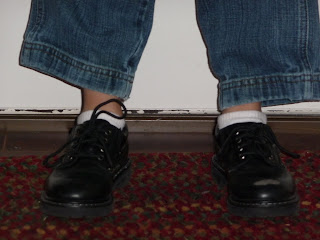 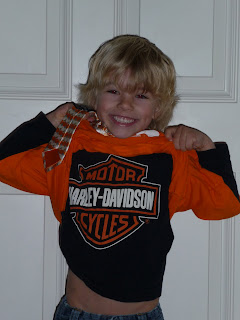 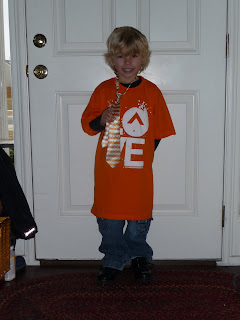 We took a quick trip to FL for a mini-reunion with all of Bryan's brothers and their families and his parents (yes, if you were counting, that is 19 of us) last weekend.
It was eventful.
Gavin pooped out of his diaper 4 times and went through all the clothes I packed for him in 10 hours. Ian threw up all over the back seat in the van. And that was just the trip down there.
It was a rough start, but surely it would get better after that, right? I mean, nowhere to go but up, yes?
Except that Sunday morning, Bryan woke up in excruciating pain in the wee hours of the morning. We consulted Dr. Google and all signs pointed to kidney stones. After a visit to the ER, a hundred dollar copay, and $70 of narcotics and anti-inflammatories, he had an official kidney stone diagnosis and permission to be miserable for the remainder of the trip as he waited to birth his very own baby. (Actually, he was a real trooper. And though he did spend lots of time doped up in the hotel room, when he was awake, he was helpful and even pleasant!)
Meanwhile, everyone else's families got a stomach bug, which, I don't THINK was ours to begin with, because Ian does get carsick and we had lots of stop-and-go traffic, but it could have been an unintentional gift from us. Who knows?
We ended the trip with a 13 hour drive back, complete with 3 hours of driving in the snow in the dark at the end.
Awesome.
It was very very very good to see everyone, though. And the kids had fun- you know, when they weren't puking. We will have to do this again. After we recover from this vacation. Pics to come soon.
Posted by Laurie at 12:06 PM 2 comments:

Ian has always been a ladies man. His best friends have (for the most part) been girls, except for the bro-mance that he and Porter from next door, have started. But as far as school goes, he tends to stick with the girls.
Until he met Colin. And they both discovered Transformers.
Ian talks about Colin all the time. Colin plays Transformers with him. Colin says it's "Optimus Crime, not Optimus Prime, and he is always right about Transformers." He even had to have shoes like Colin.
And the other day I found this note in his back pack. How cute is that? 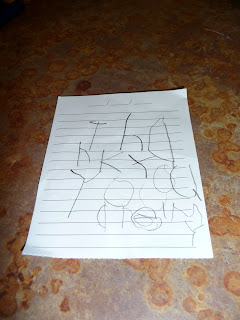 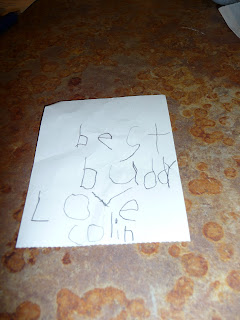